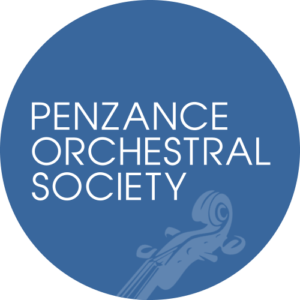 Welcome to the website of Penzance Orchestral Society, the UK’s westernmost symphony orchestra, which has been running since 1907.

We have two seasons a year, during which we hold ten weekly rehearsals before giving public concerts in March and November. Members pay an annual subscription of just £30, which covers music hire, rental of both rehearsal and concert venues and the fees of our two annual soloists. We currently have vacancies for violinists and a harpist but we always welcome enquiries from all players as we sometimes need deputies or expanded wind or brass sections. Our concerts are in either St John’s Hall or St Mary’s Church and we rehearse in Humphry Davy School. Our leader is Pamela Rosenfeld and our conductor, the Cornish composer Judith Bailey.

As a registered charity (no 265510) we welcome donations to help us continue our work. One of the nicest ways you can support us is by becoming a Friend. For £15 a year (and you’re welcome to donate more!), you’ll be sent details of our concerts in plenty of time and given the chance to book ahead of the crowd. In our concert intervals you’ll be welcomed with free wine and a chance to meet our other supporters and members of the orchestra but your main reward will be knowing you’re supporting a remarkable piece of West Cornwall culture!

This family-friendly matinee has a watery theme as well as highlighting major works by two women composers with close Cornish associations. We begin with Doreen Carwithen’s stirring Bishop’s Rock Overture.  Then comes the Concerto for Orchestra by our distinguished conductor, Judith Bailey. Based around the four ancient elements of earth, fire, wind and water this highlights different sections of the orchestra through an array of solos from each section. The watery theme is then set aside for Weber’s glorious bassoon concerto which we’ll be playing with soloist Laurence Perkins. Virtuosic and lyrical by turns, this piece is 200 this year. To find out more about Laurence you can visit his website: https://laurenceperkins.com. After the interval we meet the ocean in all its moods from tranquil to terrifying in the Four Sea Interludes from Benjamin Britten’s Peter Grimes.

This concert will take place in St John’s Hall, Penzance. Tickets cost  £10 to adults and are free to accompanied under-16s. To book them via the Minack Theatre website click here. To find out more about Laurence and his career and many recordings, click here. 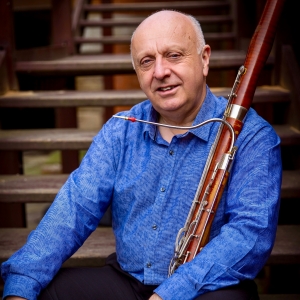 In 1906, six young men of Penzance who had formed themselves into a musical ensemble called ‘The Clefs,’ decided to form an Orchestra. They were Walter Barnes, E. A. Gordon Rogers, George H. Shakerley, Alfred W. Robinson, Barrie B. Bennetts and Osbert Howarth. The elected conductor was Walter Barnes, who said he had “colossal ignorance of everything appertaining to the conducting of an Orchestra”.

The Penzance Amateur Orchestra played their first public concert on April 7th.1907, at St. John’s Hall. The concert was welcomed as a “Signal Success”. Those were the small beginnings from which the present orchestra grew.

Although he was a talented violinist, Walter played the violin at only one concert given by the orchestra – this was in celebration of their 30th anniversary in March 1937.

Walter’s last concert was in November 1941. He died early in 1942. He had been grooming J. Morgan Hosking to ‘follow in his footsteps’ as conductor, but he was away on war service. So, R.J. Maddern Williams took up the baton and kept the orchestra going during the remaining years of war.

In 1946, when Morgan Hosking returned from active service in the Navy, Maddern Williams resigned so that Mr. Barnes’ wish should take effect. Thus the 108th concert was Mr. Hosking’s first appearance as regular conductor. His last concert was the 233rd in April, 1981. He conducted the orchestra for a period of 35 years and handed the baton to David Ball, when many thought he was too young to ‘retire’. When asked why he decided to retire, he said he wanted people to say, “Why did he go?” not “When is he going?”. He died in 1993.

David Ball, a local-born science teacher who had long been a organiser of concerts in his parish at St Hilary, conducted the orchestra from November 1981 to April 2001 then rejoined it first as a oboist and subsequently as a viola player.

The current conductor, Judith Bailey, was born in Camborne. She trained at the Royal Academy of Music where she studied clarinet, piano, composition and conducting. Her freelance career in music has been largely centred in Hampshire, where for 30 years she directed the Petersfield and Southampton Concert Orchestras. During this period she had a large number of compositions for orchestra and instrumental ensemble published, often coming to Cornwall to do her writing at the house near Hayle, to which she moved permanently in 2001.

The current leader, Pamela Rosenfeld was born in London, and became a Junior Exhibitioner at the RCM, before graduating from The Guildhall. She moved to Cornwall to teach for the County Music Service in 1975. She has led many ensembles, including the Rosenfeld Trio (for South West Arts), local choral societies and orchestras. 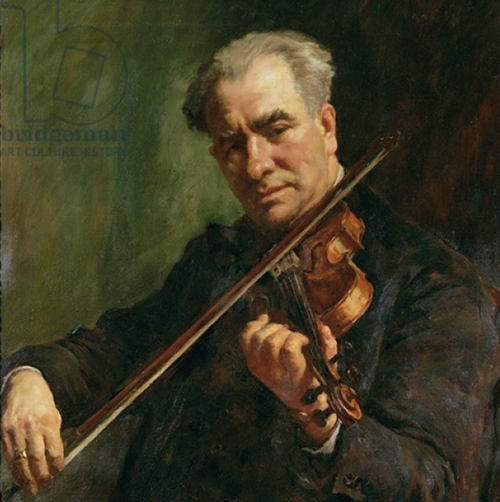 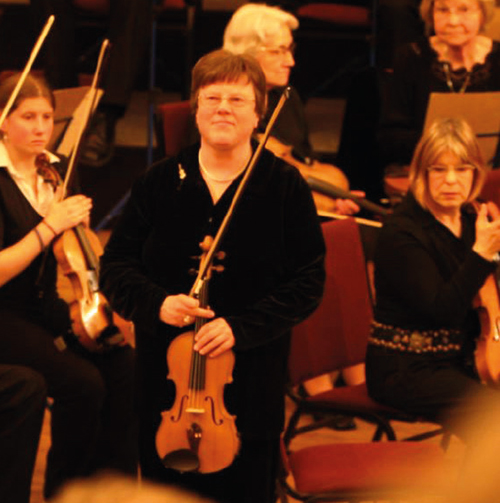 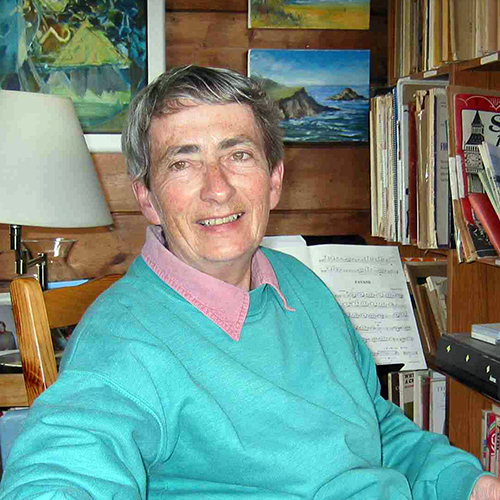 Being an unthreatening society, we don’t hold auditions, but we do require that you have reached a standard to cope with the symphonic repertoire: at least Grade 5 for string players, and grade 8 for wind and brass. At the moment our only vacancies are for violinists but it’s always good to hear from other players to add to our waiting list and to call upon when we need deps for rehearsals. Just fill out the Join the orchestra form and click send and one of us will get back to you. You may also use this form simply to send us a general enquiry.